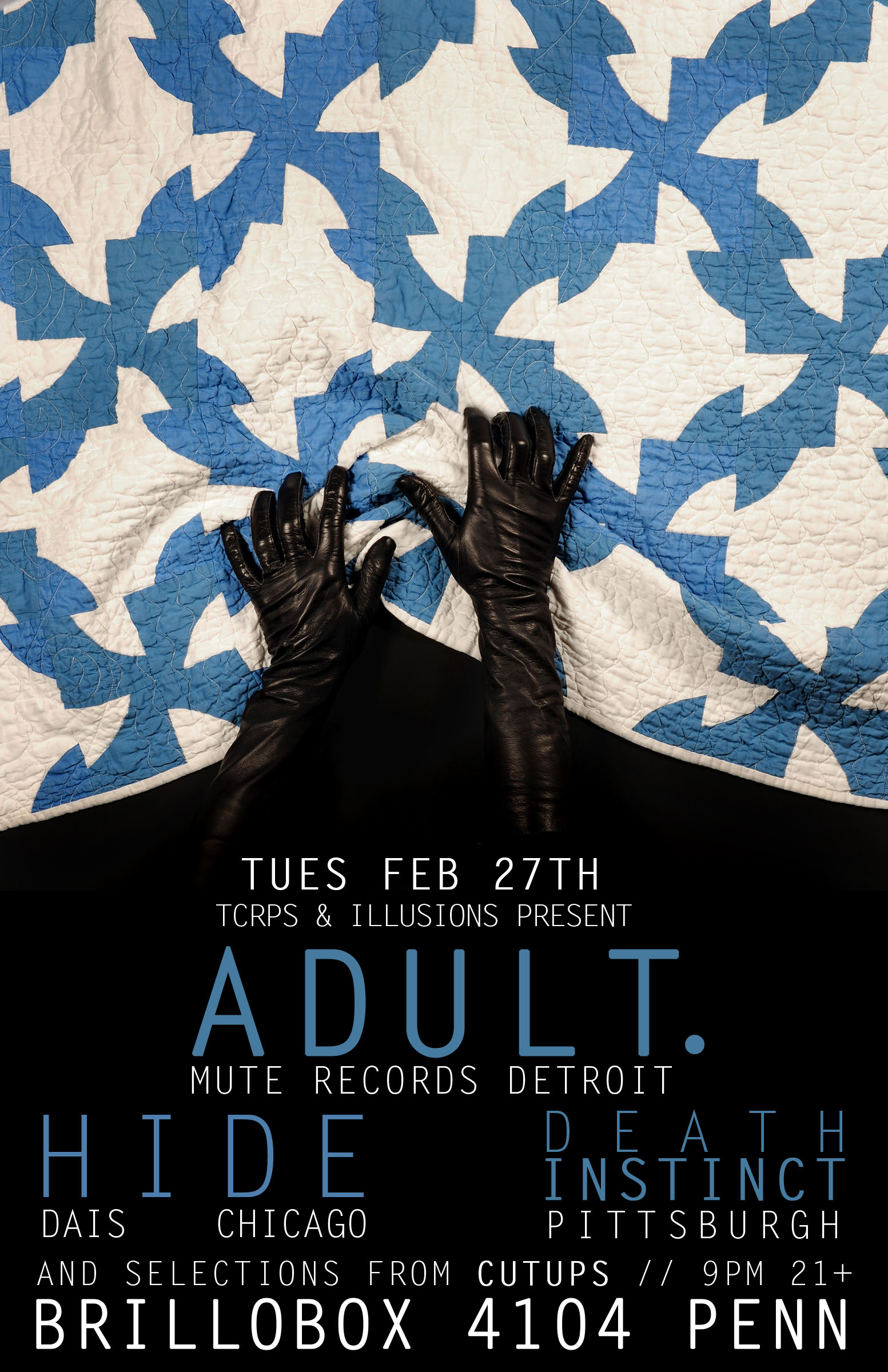 a dark evening of live electronic
+ human performance by

before and in-between sounds by CUTUPS
https://soundcloud.com/cutups/sets/illusions

More info on the performers

ADULT. is the Detroit duo Nicola Kuperus and Adam Lee Miller. They played their first lives show together in Germany in 1997 under the name Artificial Material. In early ’98 they released their first 12″ under the moniker Plasma Co. Later that year, they released their first 12″ under the name ADULT. Currently, they have released 5 albums and 19 EPs or singles on Ghostly International, Thrill Jockey, Clone Records and on their own label Ersatz Audio, (which currently has over 40 releases since ’95) They have remixed over 20 acts as well, including Tuxedomoon, John Foxx, Death In Vegas and Pet Shop Boys (for Moog Music). Before forming ADULT., Miller was half of the band Le Car.

Kuperus and Miller also make sculpture, paintings, films, photographs, performances, videos and installations. They strive to intersect the lines between art and audio. They have exhibited their work at institutions such as the Austrian Cultural Forum (NY), Mattress Factory (Pittsburgh), Detroit Institute of Arts (Detroit), MOMAS (Saitama, Japan), and Centre d’art contemporain de Meymac (FR). They have shown their film The Three Grace(s) triptych at places such as Anthology Film Archives (NY), Distrital Film Festival (Mexico City), and Grey Area for Art and Technology (SF). — discogs

Since Hide’s inception in 2014, the duo of Heather Gabel and multi-instrumentalist Seth Sher has steadily released a single demo approximately once a year, often confronting hard-hitting topics such as societal power dynamics and gender-based discrimination (the group’s 2017 Black Flame EP is dedicated to Reyhaneh Jabbari, an Iranian woman executed for killing a man who allegedly tried to rape her). 2018 will mean an entirely new focus for the pair as they will welcome their debut LP in early spring via DAIS Records (Youth Code, Drab Majesty, et al). Prepare to be pulled down a dimly lit path of danceable industrial rhythms, thundering sawtooth bass lines and noisy synthesizer swells, with pied piper Gabel leading the way. — Revolver

A three-piece post punk and shoegaze group formed in 2015. For fans of Chameleons, A Place to Bury Strangers, Soft Moon, Bauhaus, and Ministry.