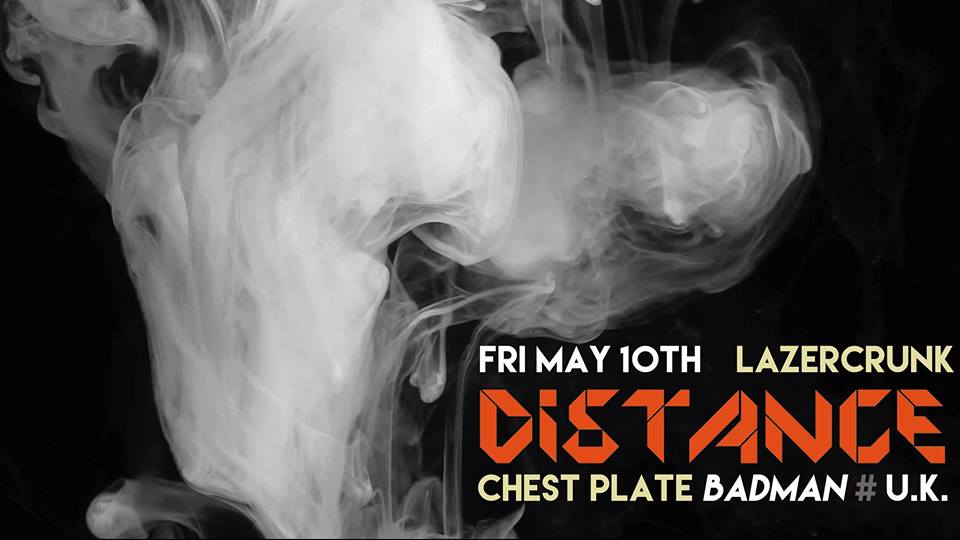 DJ, producer, and label owner of Chestplate recordings, Distance is one of the originators of the dubstep genre and has pretty well done it all. He’s credited to bringing in a darker, heavy metal and industrial influenced sound palette, and his sound blends together those sounds with more technoid dendancies and the heaviest, chest thumping bass riddims. You can not miss this one.

plus your resident stalwarts mixing up all the latest jams…

More on Distance
Distance (Greg Sanders) is a world-renowned UK producer, DJ and label owner of Chestplate (established in 2007). He is one of the originators of the dubstep genre and has been instrumental in the development of dubstep since its early years.

Musically, Distance is credited with introducing new elements of metal to dubstep at the start of the genre. Whilst many dubstep producers reference influences such as King Tubby to Lee Scratch Perry, Distance’s influences hail from the likes of Sepultura, Pantera and Fear Factory. With a background of heavy metal and experimental industrial music, his sound blends heavy metal, industrial rock, dub, reggae and techno.

Distance has produced remixes for artists including Nicki Minaj, Paloma Faith, Bastille and many more. He has collaborated with acclaimed producers including Skream, Benga, Pinch and J:Kenzo.
Distance released on seminal underground labels early in his career including Hotflush, Tectonic and Boka. He released his debut album, My Demons, on the influential Planet Mu label in 2007. The album won Dubstep Forum’s album of the year.

My Demons was followed by Distance’s second album, Repercussions, in 2008, also released on Planet Mu. Distance released the single ‘Falling’ in 2011, with widespread support from DJs such as Skream, Benga, Hatcha, and radio support from DJ Swerve on Kiss FM and MistaJam on BBC 1Xtra. His third album Dynamis was released on Tectonic in 2017.
Distance had early radio support from the legendary John Peel, and in 2006 he was selected to be part of the seminal ‘Dubstep Warz’ show on Radio 1 presented by Mary Anne Hobbs (the show credited with breaking dubstep globally). Distance had a label residency on BBC 1Xtra and had a long-running radio show on Rinse FM from 2004-2013.

Distance has performed across the globe, as well as having performed regularly at major clubs including FWD, DMZ, Exodus and SUB: DUB. His record label Chestplate had a residency at the legendary Fabric nightclub in London from 2013-2015.