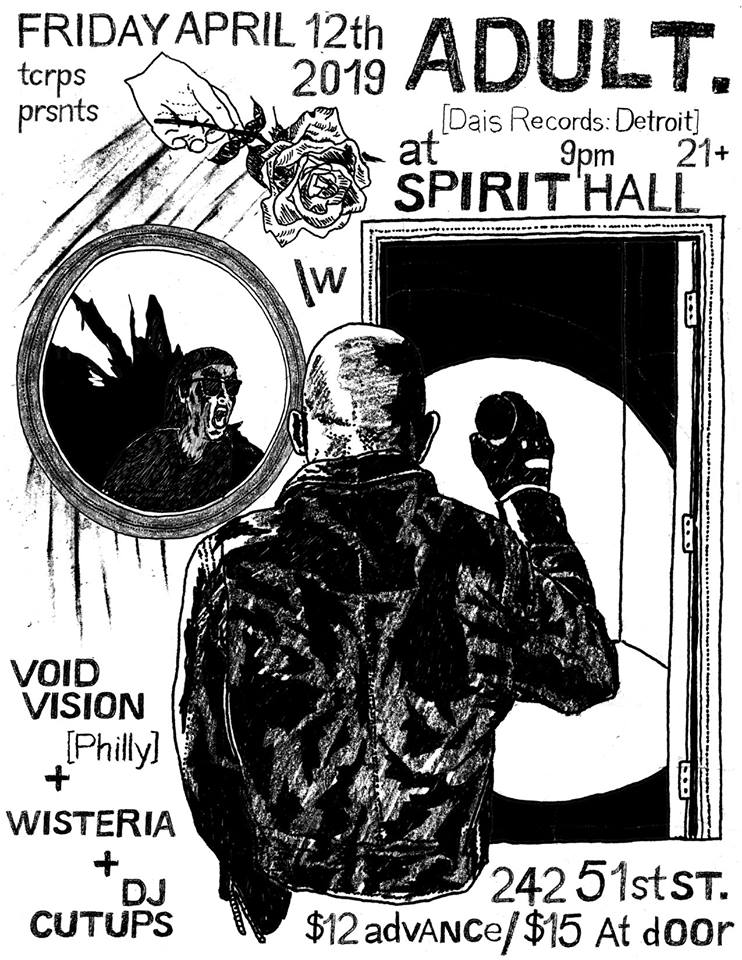 this event is co-presented by Spirit.

The album began as 23 demos written and recorded in a remote cabin in the woods of Northern Michigan during the dead of winter. In total isolation, and with a reduced amount of gear (a modified version of their live setup) on the cabin’s kitchen table, the duo were completely immersed in an incessant inescapable studio of their own making – looping, repetitive analogue sequences grinding away day and night. At the end of the intense demo session, a handful of peers were enlisted by the band for the difficult task of paring down the demos into the final album.

The result is 10 tracks of uncompromising dark electronics, showcasing ADULT.’s return to aggressive and energetic dancefloor mastery. Album opener “This Behavior” alongside the follow-up “Violent Shakes” (which ascends into synths wailing like warning sirens over Kuperus’s commanding vocals) set the stage for an on-edge listen, while the heartbreaking “Silent Exchange” unfolds as a beautiful sad synth dirge. “Perversions of Humankind” breaks the mood – driving the listener into a slow and low groove before the frantic album midpoint of “Irregular Pleasure”. “Does The Body Know?” is the album’s post-punk anthem, with irresistible singalong “we’re out of order – we’re undefined!” The latter half of the album drives forward with “On The Edge (You Put Me…)” and “Lick Out The Content”, refusing rest and demanding movement and response. “Everything & Nothing” emerges slowly from sparkling synth textures, snowballing with nervous energy into an acid techno stomper before the album comes to a close on the icy landscape of “In All The Debris”, a goose-bump inducing slow electronic mantra that closes the curtain on a massive album.

Artist statement on the album’s writing process:
“It’s confounding how often we negate the importance of disconnecting, getting weird, getting lost. Discomfort and joy intertwined. Day to day, theatrical self-presentation set to rest in our frantic social world. Public becomes private, almost too private. Looking out into frozen woods as you deliver your vocals. For who? For what? Taking walks along icy shorelines as you try to overcome writer’s block, as you try to overcome yourself. Not seeing anyone for days and weeks on end. Overwhelming thoughts and feelings come rushing in; anxiety, fear, purpose, banality, futility of task, power structures, power struggles, pointlessness, collapse. You’re faced to face yourself. Your awareness is heightened. You are neither here nor there. You are in a liminal state. As you work in this isolated cabin your windows become mirrors.”

Void Vision is a Philadelphia-based electronic project helmed by Shari Vari. It began around 2009 at a time when a wave of synth-revivalists were materializing, but the quality of the songwriting and intense vocals set the band apart from the pack. In a rare instance, Void Vision has managed to combine vintage dance elements with melodic structures, haunting melancholy, and lyrics that have a palpable soul. The songs themselves are dynamic, referencing a cross-section of the last 30 years of electronic music, while simultaneously retaining a uniqueness all their own.